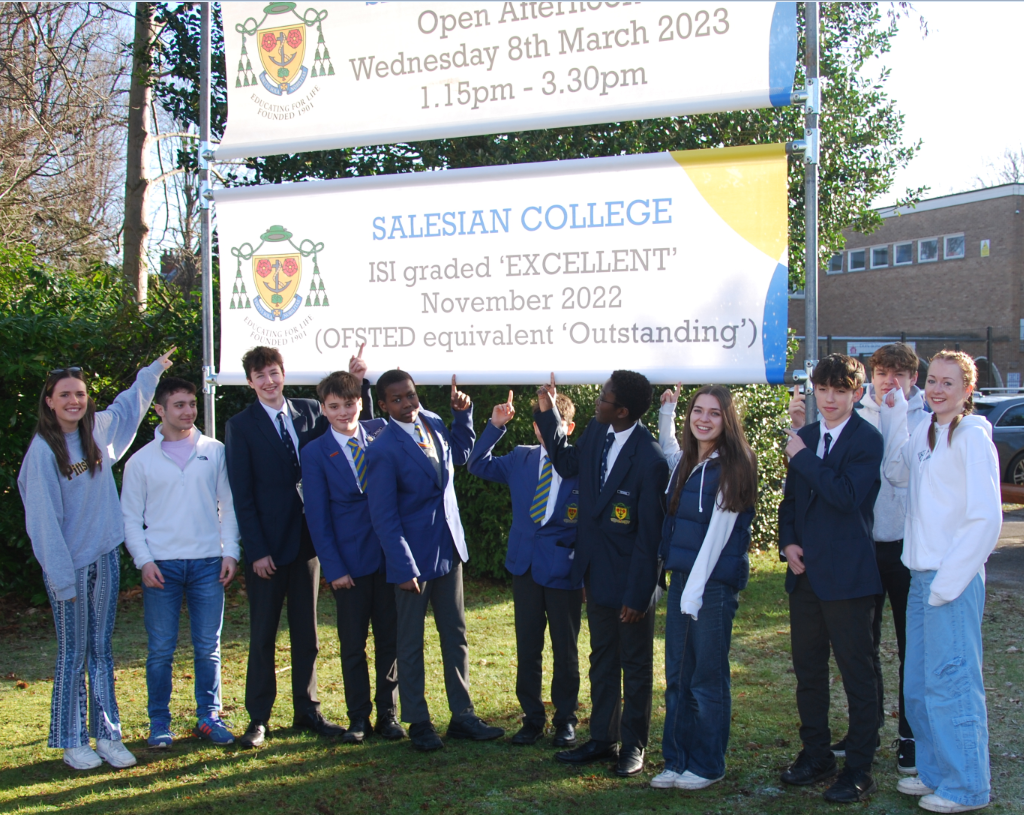 Salesian College Farnborough is delighted to announce that the school continues to be graded ‘Excellent’ by the Independent Schools Inspectorate (equivalent to Ofsted ‘Outstanding’).

The College received the top marks of ‘excellent’ for the academic achievement and personal development of its students, following the full inspection which took place in November 2022.  Evidence was obtained from students, parents and staff and from first-hand observations of lessons, break times and after school activities by the ISI inspection team, appointed by the Department for Education to monitor standards in the independent schools sector.

In addition to its ‘excellent’ educational ratings, Salesian College also met all the required standards following its Regulatory Compliance Inspection.

Mr Gerard Owens, Headmaster said, “I am overjoyed that the inspectors witnessed and reflected what we see every day: that Salesian College develops a family community where people matter most and whose outstanding levels of academic progress, sporting excellence, creative achievement and exemplary behaviour are facilitated by our compassionate and caring ethos.”

“We are extremely proud that the vision of St John Bosco continues to be recognised as excellent and that, as he himself said “…education is a matter of the heart”.

Positive comments from the ISI report include:

The full ISI report can be viewed here.

It has been a long, productive, tiring but ultimately joyful term. The College has had a sense of many joyful day trips, joyful foreign trips and joyful visitors, including the team of Inspectors who visited this term!

I have been very proud of the great dedication of the staff who promote such wonderful opportunities for our students to learn both inside and outside the classroom. Our students have responded to the challenges given to them with good cheer and hard work.

Don Bosco clearly identified that a Salesian Community is a Home, Playground, School and Church and in this newsletter, it illustrates all the events of this term, which have fulfilled and expanded upon our founder’s vision of a successful Salesian Community.

Have a restful and joyful Christmas 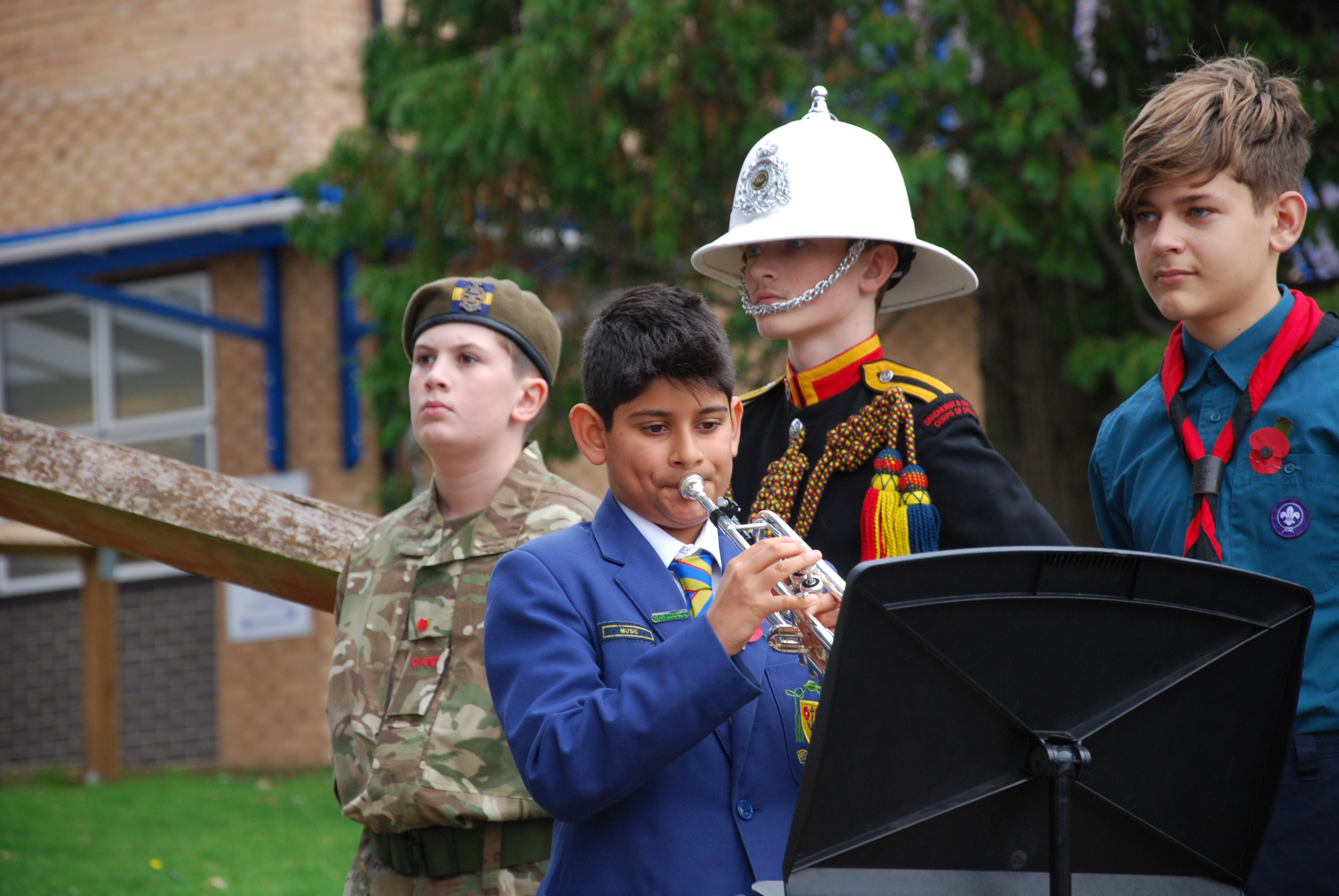 On Friday 11 November, we came together to remember those who had made the ultimate sacrifice in conflict.  We were honoured to be joined for the service by Bishop of the Forces, The Right Reverend Paul Mason.  Our service of Remembrance began as staff and students gathered on the playground to a rousing rendition of ‘Amazing Grace’ played by Mr Rudolph on the bagpipes.  Theo D in Year 8 played The Last Post as we joined with the nation in two minutes of silence to reflect on the lives of the fallen.  The silence was broken by Theo playing Reveille.  Our service of Remembrance continued as the Headmaster and Will and Charlotte, our School Captain and Head Girl, processed for the laying and blessing of the wreath.  Mr Owens then read the Roll of Honour of former Salesian students who lost their lives in World War One.

As the school community made its way into the hall, they were welcomed by the College orchestra playing Nimrod with entries from the recent Year 9 Battlefields trip photo competition on the screen.  An introduction to the Mass took place with Arthur H (Year 11), James P-M (Year 10), Danny F and Rosko H (Year 9) recalling key moments from their recent trips to the Battlefields of World War One.

Bishop Paul and Fr Pat guided us through the celebration of the Eucharist, ably supported by altar servers, Fraser C, Deacon M and William C.  The choir and orchestra provided a beautifully sombre expression of reflection throughout, including a moving solo performance by Alex M during communion.  Our readers, Will H, Henry C, Alex C, Harry M, Daniel R, Will F and Tobi A were excellent and examples to the rest of the school.

The College community observed the service of Remembrance with solemnity and respect throughout.

They shall grow not old, as we that are left grow old:
Age shall not weary them, nor the years condemn.
At the going down of the sun and in the morning
We will remember them.

Since the start of the academic year in September, we have taken our students on numerous off-site educational visits to enhance their learning and personal development. These range from local Geography field trips around North Camp during lessons, to overseas residentials, such as the WW1 Battlefields in Belgium and France. Throughout the year we offer all students the opportunity to participate in educational visits of an academic, cultural or leisure interest, including foreign language visits to France and Spain, international History, Geography, Physics, Sports and Economics tours, as well as day visits and theatre trips within the UK for all curriculum areas.

On Wednesday we welcomed over 150 prospective Sixth Form students', and their parents, to our Open Evening. The was an audible buzz in their air as the visitors arrived and spent time in discussion with students' and staff at our Freshers' Fair, to discover more about the enrichment opportunities we offer.

As everyone took their seats, through a combination of video, discussion and presentations, we demonstrated life at our Sixth Form focussing on the themes of Realise Your Potential, Vibrant Student Life, Play Your Part in the World, and Reach Out to Others. All visitors then had the opportunity to visit the departments, to discuss in detail our curriculum offer, and ended the evening with refreshments and informal discussions. This is an exciting time of development at Salesian Sixth Form and students are moving forward to our Sixth Form internally and from a wide range of local schools.

It was a fantastic evening, and a big thank you to everyone who contributed to making the evening a great success, particularly our wonderful students.

Salesian College continues to be Excellent

Salesian College Farnborough is delighted to announce that the College continues to be graded ‘Excellent’ by the Independent Schools Inspectorate (equivalent to Ofsted ‘Outstanding’).

Mr Gerard Owens, Headmaster said, “I am overjoyed that the inspectors witnessed and reflected what we see every day: that Salesian College develops a family community where people matter most and whose outstanding levels of academic progress, sporting excellence, creative achievement and exemplary behaviour are facilitated by our compassionate and caring ethos.”

“We are extremely proud that the vision of St John Bosco continues to be recognised as excellent and that, as he himself said “…education is a matter of the heart”.